It’s hard to recall exactly when he came into our lives. Was it 10 years ago? 15? More?

He first appeared in L’s yard. He was a big boy and looked strong and healthy. A beautiful black and white tuxedo cat, he was not friendly or approachable. He was very aware of his surroundings and knew every escape route. He kept coming back to the yard so of course he must need food. L first put food in a dish and placed it in the back driveway. He was alway wary, ever cautious of anything that might get too close to him. This dance of the food dish went on for awhile as this mysterious feline kept coming back to the yard. Slowly over time, L was able to move the food dish off the ground and up on the back porch. It was then she heard that little squeaking noise he spoke when looking for a handout. Thus the name Squeaky was bestowed upon him.

Every so often, Squeaky would wander over into my yard and of course I fed him. But still, he remained aloof. He would hang out in my yard and exchange conversations with my cat Schroeder thru the screen windows. It was a chatter fest and often amusing to listen to. What were they talking about? I imagine Squeaky was telling Schroeder all about the outside world while Schroeder spoke of the joys of human pampering.

Squeaky loved to roam the neighborhood and we would see him in other yards and crossing the busy street on many occasions. He was very street smart and was always safe. More than once I saw him in the overnight hours roaming the streets of the village square, some quarter mile away from “home”. I would yell at him and tell him to go home but he carried on his route and surveyed his territory as he saw fit. He was not one to be told what to do! He was truly the king of his territory.

More and more, Squeaky seemed to regard L’s back yard as his home territory. He even found himself a nice little corner in the yard where leaves would pile up in the winds of Fall. Knowing he favored this corner and these leaves, L and her husband C would rake the yard, fill the corner with leaves and and save a barrel full of leaves to use throughout the winter months to help fluff up the pile. What a life! 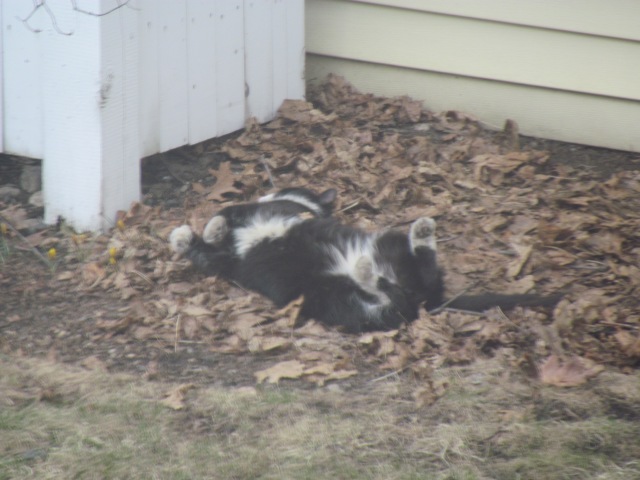 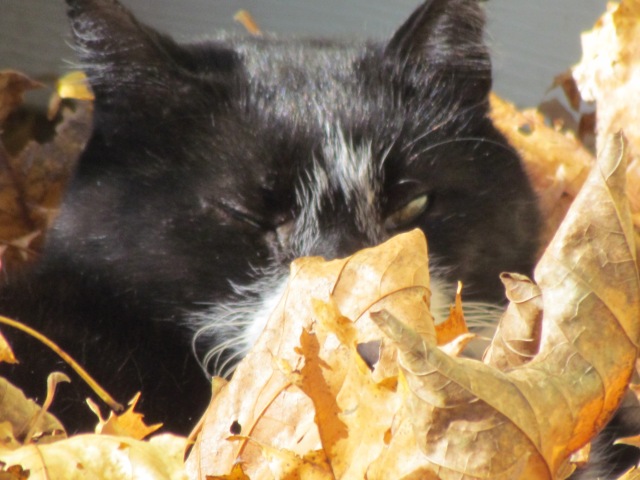 And then one year Squeaky disappeared and did not come back. We looked for him every day for a while but it was clear he had moved on. We hoped that was the story rather than thinking he met a more ominous fate. So L put away his dishes and we went about life without our special friend. It was probably a year or so later, during the winter and after a very large snowstorm that Squeaky returned. C was in their yard shoveling out cars and adding snow to the giant pile that had already been plowed in the back yard. I was doing the same in my yard. I turned at one moment and saw a flash of black on top of the snow white pile. And there, sitting on top as if he was king of the world, was Squeaky! 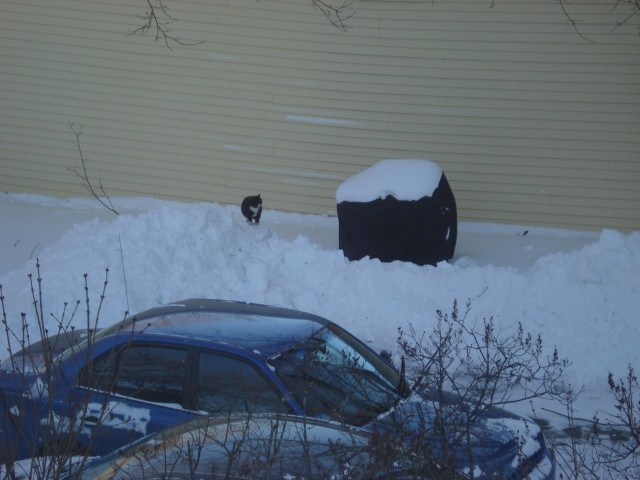 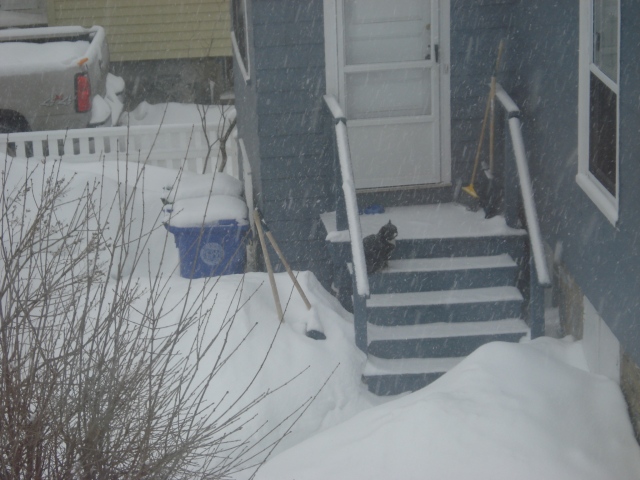 We all rejoiced that our old friend had returned, looking none the worse for wear. Out came his special dishes and there he was, sauntering up on the porch, ever cautious, and enjoyed the meal that was presented. He was back! And he hung around for awhile. Every morning he would appear and wait for the food to be put out for him. After breakfast, he would settle in his leaf pile and enjoy the warmth of the sun while he dozed. He would return in the evening and after dinner, off he went to parts unknown. We often commented how much fun it would have been to have a “Squeaky Cam” to see where he went! One of the oddest things was that Squeaky would never show up to eat on Sunday. Ever! Where did he go on Sunday…was there cat church? Did he go visit family? We will never know. The years went by and the routine stayed the same. Leaf pile, eating on the porch, napping under the bushes in the heat of the Summer. Once in awhile he would be gone for a few days but always turned up again, looking for his dinner. One year, about two weeks before Christmas, he did not come back. We worried terribly for him because by now, we were all attached to “our” cat. The sad part about feral cats is you never know what happens to them. Once again, we thought he was gone for good. I went away to Maine for the holiday and on Christmas Eve, L texted me saying he showed up for dinner! A Christmas miracle! We asked him where he had been but he just looked at us and smiled….and said nothing.

A few years ago, Squeaky finally started to let his guard down and would walk up on the porch while L sat there next to his dishes. She could not touch him but he felt safe enough to be that close to her. This turned into moving his dishes inside on the porch where he would go but would not stay. L had gotten him a little bed and placed it out on the porch for him. She lined the bed with an old cashmere sweater…what a life! Squeaky loved his bed and would curl up and enjoy the warm cashmere under the sun.

And then my Schroeder died. I buried him in the yard close to the lilac bushes he could always smell but never touch. We would often see Squeaky sitting by the burial spot. I believe he knew his friend Schroeder was here and he would sit quietly by the grave at times throughout the year.

As the years went by, we noticed that Squeaky was limping, was always batting at his ears and had some big patches of matted fur. In what can only be described as a matter of patience, Squeaky was trapped and taken to a vet for care. His first visit was very interesting. L had always believed that Squeaky was a “she”. Imagine the fun when the vet called to say “she” was a “he”! Lucky that Squeaky is a good name either way. At this trip to the vet, all the matted fur was shaved off, his ears were treated for mites and he was neutered and had his ear tipped. Since then, he has returned to the vet many times for updated shots, dental work and tooth extractions and other various issues. It was never easy to trap him but he was so very lucky that his humans cared enough about him to get him treated when he was sick.

Over the last three years, Squeaky has aged. His hearing and eyesight were not as sharp as they used to be. He actually started going into L and C’s house to eat. His bed was moved into the enclosed porch area and he would spend his nights curled up safe and warm. In the winter months, a space heater was placed by his bed to keep him warm. Over this time, Squeaky even started to allow us to touch him and pat him. He loved to have his ears scratched. As he ventured more and more into the house, he seemed to enjoy being inside. He remained cautious but eventually succumbed to the joy of human contact. He would get up on the couch and enjoy being patted and pampered for the evening. Who would have thought this would ever happen?! 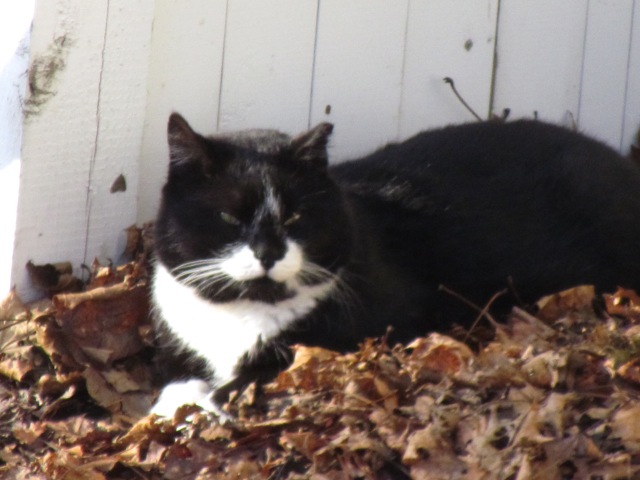 Over these last few months, it was clear Squeaks was not well. He lost weight. His eating was sporadic. There were several trips to the vet. He went willingly, no trap was needed now. Many things were tried….medications, special diets, anything that might make him better. But it was only borrowed time.

On Thursday June 27, L and C took Squeaky to the vet for the last time. He was taken, peacefully and painlessly over the rainbow bridge. It was as it should be.

What a life this beautiful gentleman lived. He far exceeded the average lifespan of a feral cat. He did so because he was smart and crafty and knew how to survive all the things that could harm him. He was smart enough in his golden years to finally let his guard down and the humans who loved and cared for him for so long into his life. He trusted us to be kind. We would not betray that trust. He  gave us endless moments of joy and laughter and mostly awe at his ability to survive and thrive. Squeaky will be greatly missed.

In a few weeks, his ashes will be returned to L and C and we will spread them in his yard, by his leaf pile, where he was most at home. Fare well and farewell Squeaks.

This site uses Akismet to reduce spam. Learn how your comment data is processed.